Sometimes buying a vehicle is exciting! And sometimes it’s like being engulfed whole in a nauseating cloud of hopeless self-doubt for, what might amount to, the worst months of your life. Let’s begin!

Let’s talk trucks. Unless you’re lucky enough to already own a large truck, you’re going to need to acquire one (or something equivalent) to make your tiny story happen. Believe me when I say, we spent a lot of time trying to decide what type of tow vehicle to pull Augustine.  It’s a huge decision, and with a market full of so many options, numbers, price tags, and specs, it can be a difficult to know where to start. It’s daunting, to say the least.

We were living in South Florida when we began our search. Taylor was in her Nissan Versa Note and I was solely driving a vintage-style scooter (because… South Florida.) Clearly these vehicles were not going to work for Augustine, which weighs just shy of a dainty 10,000 lbs. We needed something serious.

Here are some things we discovered along the way.

Before buying a tow vehicle, you need to know the GVWR (Gross Vehicle Weight Rating) of your trailer. It is the max amount of weight the trailer can handle, including people, water, food, clothes, etc. All trailers should have it printed somewhere on the body. While some models have decals, if you have an Airstream like us, there will be an oval/hexagonal metal badge near the tongue in the front. Here, you can also discover the dry weight of the trailer (what it weighs at it’s lightest – with nothing in it.)

The GVWR is the right place to start. In my opinion, your tow vehicle should at least have a towing capacity of the trailer’s GVWR. Ideally the towing capacity would greatly surpass the trailer’s gross weight. For example, my truck has a tow rating of around 14,500 lbs. – over 4,500 lbs. more than Augustine weighs. This might sound excessive, but I’ve been in a few situations where I was glad to have the extra power.

Having a tow vehicle that exceeds the trailer’s GVWR comes down to more than just the tow vehicle’s actual ability to pull the trailer. The suspension, brakes, even the tires, all play an important role in towing efficiency and safety. Picture yourself headed downhill on a winding Appalachian highway and having to fast break… you’re not going to want to have a vehicle that’s towing ability (or breaking ability) is maxed out.

Once you know your trailer’s GVWR, you can make a more educated decision on which tow vehicle is right for you.

Tow vehicles will have two weighted numbers associated with them: the tow capacity, and the payload. These numbers are not interchangeable and are vastly different. The tow capacity is how much weight the vehicle can pull behind it on the hitch, while the payload is how much weight can be placed in the bed of the vehicle. For the case of Airstreams and other pull-behind trailers, the tow capacity is the most important number. The payload applies more for 5th wheels and slide-in’s. Since we are pulling an Airstream, getting the right tow capacity (to exceed our GVWR) was what we focused on while hunting for a vehicle.

In general, when looking to tow anything but the lightest (read: smallest) of trailers, you’re going to want to go the truck route. A truck may sound intimidating to some, but it is most likely the best fit for the job.

If you’re new to the truck game, there are three main types of truck engines you will encounter:

V6 is the lightest of the three, with the lowest rated towing capacity. Trucks that would fall into this category would be most smaller: Ford F150, Chevy Silverado 1500, Dodge Ram 1500, Toyota Tacoma, etc. Within the V6 category there are still engine sizes, all with differing tow ratings. Some modern V6 engines, (the new Ford F150 eco boost is one I looked at) when fully equipped, would be quite capable of towing most small/medium trailers.

V8 engines are going to the bulk of the larger truck sector – F250, Silverado 2500, Ram 2500, etc. These engines are generally a step-up in power and performance. All engines have “Liter numbers” associated with them, indicating how much the engine displaces. Generally speaking, a larger displacement (the number of liters it goes through) signifies the amount of engine power, i.e. towing ability.

Diesel engines are typically the cream of the crop – the highest performing trucks, capable of towing the heaviest loads. Diesel engines have come a long way from the smelly, loud versions of the past. Diesel trucks are, however, a trade off. They generally come with considerably higher sticker, repair, and fuel prices, but with the added benefit of engine longevity, durability, and higher resale values. Diesel engines depreciate less over time due to how long they are known to last. They can easily reach 500,000 miles (some people say they have seen odometers with 800,000 miles.) A Diesel truck might be the best long-term option for towing larger trailers.

We looked for a truck that already had a Tow Package. This is a vehicle that comes set up specifically for towing – the trailer plugs up and you go. Typically, these packages include beefier brakes, separate trailer brake controls installed, stiffer suspensions, etc. After market options exist, of course, but buying a truck previously equipped is by far the easiest route. You already know the engine was designed to haul.

The integrated trailer braking control on the dash is a specifically helpful feature, and one to look for. You simply pinch the controls and the trailer brakes are initiated, saving the brakes on your truck from doing all the work.

When searching for a truck, you will see varying numbers associated with the vehicles torque and horsepower. You might be wondering which one is more important for towing. Which one should you be paying more attention to? The answer is torque. Higher torque represents the power of the lower gears to pull heavy loads. Think: the power used to start movement of a loaded vehicle from a dead stop. Torque plays a huge role in towing and a high rating is something we looked for in our truck.

The truck we ended up with is a 2016 Chevy Silverado 2500 HD WT. That last part standing for “Heavy Duty, Work Truck.” This is a no-frills model designed to haul. No carpets, no running boards, no real amenities… just Truck. To its favor it has off-road tires, 4WD, higher clearance, towing mirrors, and a pretty beefy tow package with trailer break controls. It also has four doors and an extended bed. Its GVWR is 14,500 lbs. This Silverado was exactly what we were looking for in a truck:

We hope this light overview helps. We certainly don’t know everything about trucks or towing, but we want to share some of things we did learn during our journey. Finding the right tow vehicle is usually not easy, it’s certainly not always fun, but it’s a huge step forward in making tiny living a reality. 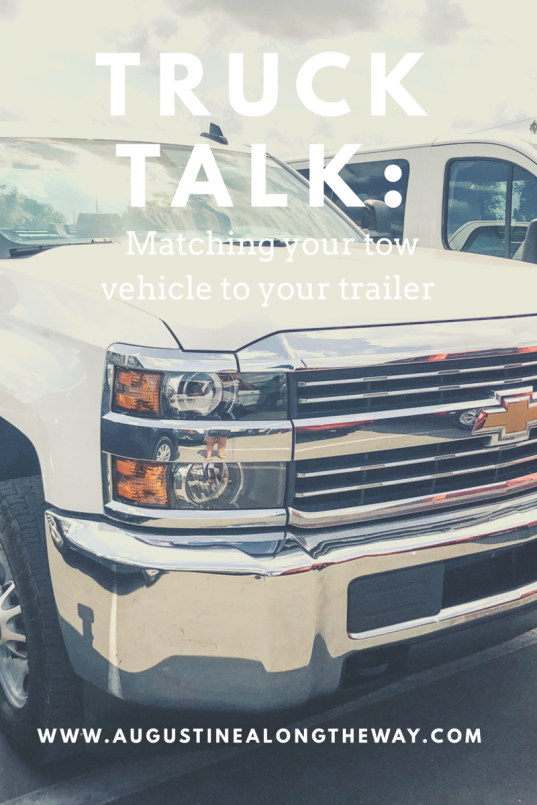 One thought on “Truck Talk: Matching your tow vehicle to your trailer”

This site uses Akismet to reduce spam. Learn how your comment data is processed.